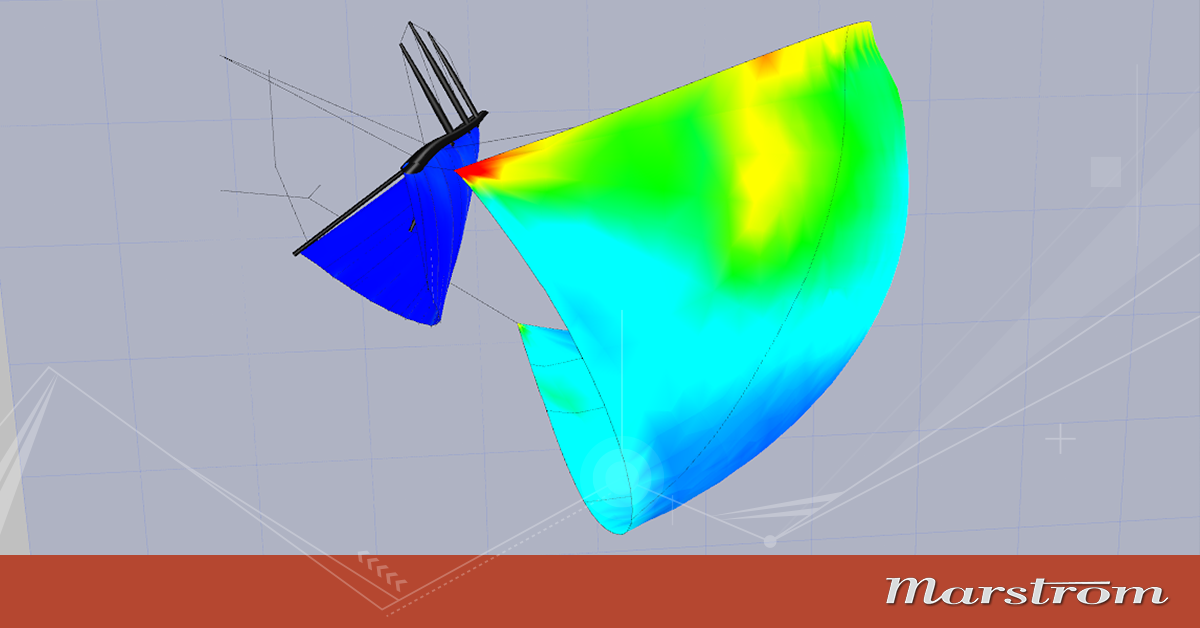 This is a first in a series of Marstrom Tech articles where the topics around the Baltic 68 Café Racer outlined below will be discussed. You can also visit the Carbo-Link yacht rigging section for technical details regarding the B C68 CR rigging or https://www.balticyachts.fi/yachts/baltic-68-cafe-racer/

The challenges of designing for runnerless mode

Two Gentlepersons bringing their friends out for some easy to handle fun and entertainment is the vision of the Baltic 68 Café racer. A key objective is to make it easy to extract performance from this sailing machine. 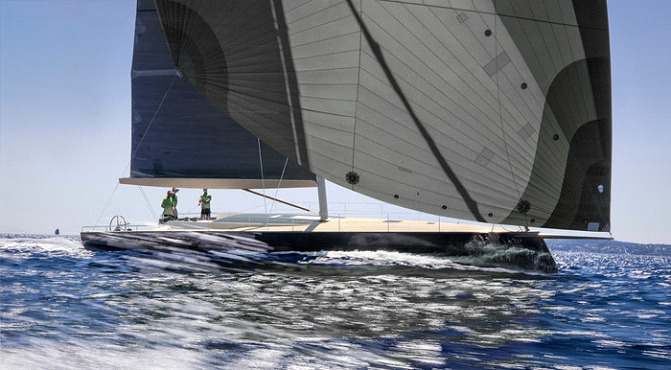 A key characteristic of a modern performance sailplan is the square top mainsail precluding the use of a fixed backstay. Instead, the rigs are longitudally supported by a set of runners requiring adjustment in each tack or gybe. Missing runner application is a risk factor, especially sailing shorthanded and something we set to change with the design of the rig for the Baltic 68 Café Racer, applying what we refer to as The System Approach. 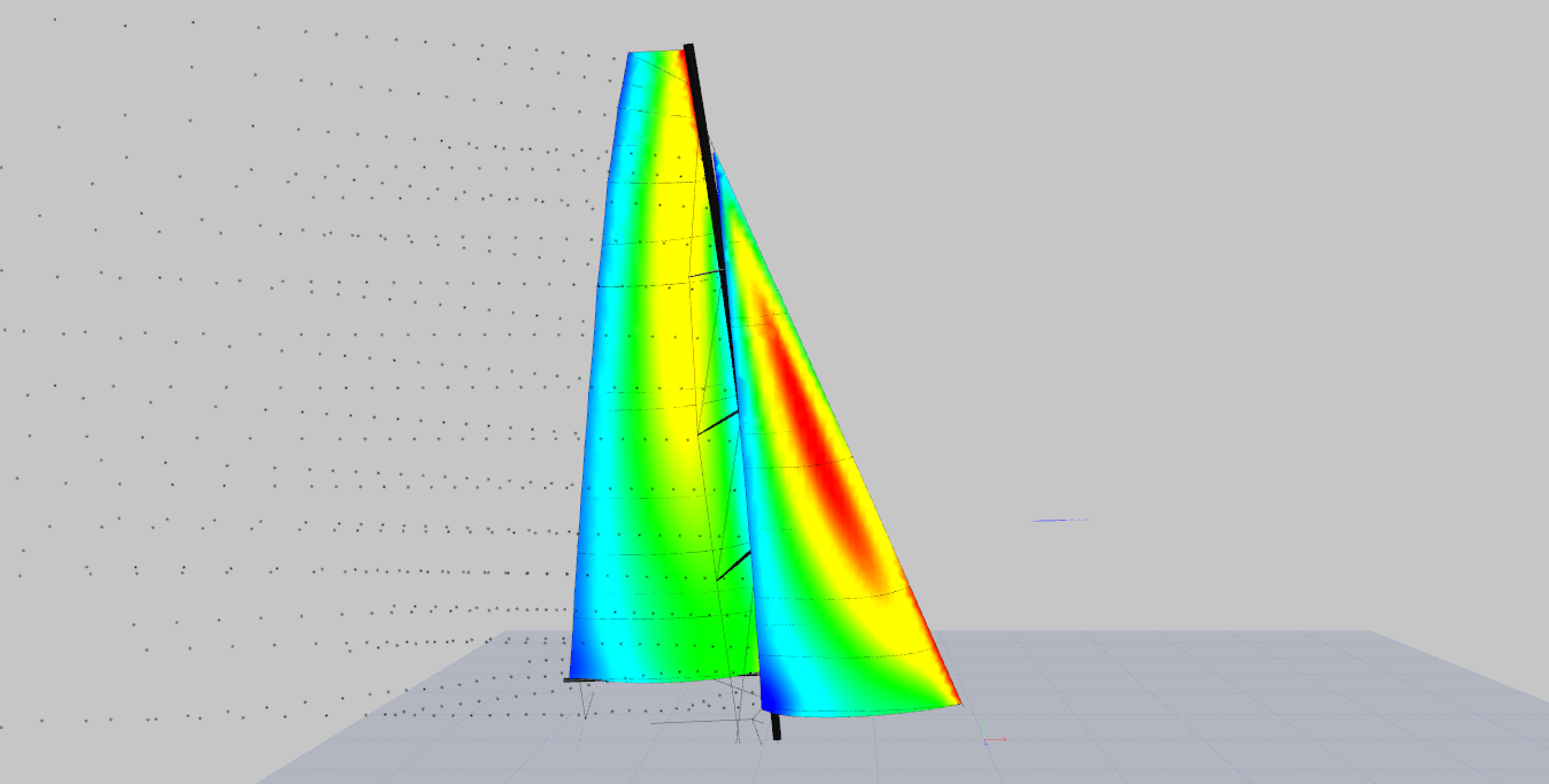 The Baltic 68 CR sports a Marstrom/Carbo-Link/Doyle Sails rig designed to sail with no aft rigging support in flatwater conditions in varying breeze conditions, yet tube weight is in the same region as a conventional rig. Comparing rigs we tend to discuss spar properties rather than rig properties where the full equation encompasses the overally geometry of the tube as well as rigging properties combined the stiffness of the hull structure itself.

The concept is in a sense not new, first being pioneered by Bergstrom/Ridder in the 80s where surprisingly skinny alloy rigs without aft rigging powered their pioneering ULDB designs Thursdays Child /Hunters Child and Route 66. While not being a full Bergstrom/Ridder design it shares the long spreaders and increased spreader sweep.

A R&R rig will also have the typical reverse diagonal bracing the rig as the leeward rigging goes slack and deck struts from the chainplates to the gooseneck position adding to the stiffness of the hull.

The modern carbon hull structure of the Baltic 68 Café Racer has allowed us to do away with the reverse diagonal as well as slightly reducing spreader sweep from the typical 30 degrees used by the B&R rig to 28 degrees. A key here is stiff rigging, where the penalty in terms of weight and drag is greatly reduced using Carbo-Link’s CL ELLIPSE rigging packing stiffness in a small and aerodynamic format.
While the headstay – mastfoot – V1/D1 chaingplate area of the yacht has been beefed up to handle increased compression loads, longitudinal torsion loads of the hull is greatly reduced being relieved of the requirement to take upwind headstay loads.

There are some obvious compromises involved. In a nosedive case the rig is designed to withstand 60 tonnes of compression and 21 tonnes of load in the V1 with the leeward rudder part out combining roughly half of the max righting moment with a pitch moment four times roll. Rigging sizing is about twice the norm to adhere to GL safety factors, which is mirrored in the engineering of the spreaders. While doubling up on rigging sizes would be a disaster for other solutions, Carbo-Link’s CL SOLID and CL ELLIPSE has the highest working loads for given stiffness in the industry with a safety factor of 2.35. Subsequently, the overall side rigging package for the yacht is only a total of 29 kgs. While side rigging rod sizes in a conventional monohull rig will frequently be determined by stiffness requirements, the nosedive case lead to the extreme rigging loads being the driving factor. Carbo-Link is able to treat stiffness and load requirements independently, meaning we could maintain desired mast behaviour through a defined rigging stiffness whilst optimising the end fitting design of the CL ELLIPTICAL rigging to match the extreme loads.

Sailing without runners has obvious challenges also upwind with ever increasing loads seen in key racing classes such as the TP 52. The Baltic 68 rig project kicked off with Doyle load sharing sail technology as an enabler reducing headstay sag through a given load.

Headsails have traditionally been built in relatively stretchy materials being suspended off, or around, a headstay or luff cable taking most of the loads with relatively low head and tack loads in the sail.
Modern sail development has seen the same evolution as everywhere else: lighter and stiffer materials. Stiffer sailcloth will result in more loads taken by the sail rather than the cable. Pushed to the extreme this means that the sail can take the luff load on its own, even in highly loaded sails.

Another development in modern sail design is the ability to lay down the material according to load paths. If you expand on this you can effectively define the loadpaths through manipulating the stiffness distribution in the sail membrane. The loads with be carried along the “stiffness paths”. If you concentrate the load carrying fibres in an arch with an offset from the luff, this arch will effectively push the sailcloth ahead of itself as the loads will tend to straighten the arch effectively reducing luff sag.

For the Baltic 68 Café Racer specifically, the combined headstay + luff loads have been reduced from a typical 12 tonnes to 9 tonnes with 50 % of this load carried in the sail itself. Interestingly this means that headstay cable loads are lower when sailing than at the dock and that you will see the highest loads in the structural headstay sailing with the full main and staysail where the structural headstay does not benefit from a load sharing headsail taking the full dock tune load (see below) as well as handling the resultant mainsail load.

Engineering for runnerless mode requires looking at extreme pitch cases such as a nosedive. As a starting point we opted for a case with half of the leeward rudder out. After this point the assumption was that the boat would be on its side broached after losing steerage. 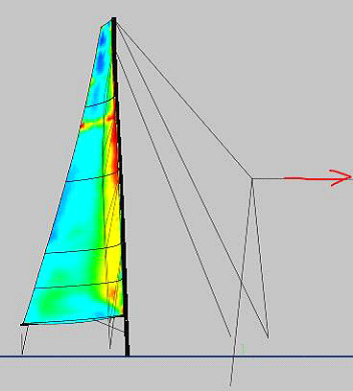 For rig load cases deep downwind, where airflow is turbulent, the normal approach has been to study this as “rig only” replacing the aerodynamic forces with a vector applied at the relevant, often the spinnaker hoist.

Looking closer into the nosedive cases we determined that the normal rig only studies would not accurately represent sail loads. The loadcase is more like pitching the boat from the middle of a “bridle cable” than just applying a force at the halyard lock.

To gain more accuracy over the bridle approach we contracted the BSG development partners K – epsilon to run open foam studies of the nosedive.

Open Foam adds turbulent flow to Sailpack studies, necessary when studying the effects of the shift of Apparent Wind Angle during abrupt deceleration. The Open foam studies have made us confident that we can use the bridle approach as a standard for cases like this after fine tuning against Open foam numbers. While accurate and satisfying, the Open Foam process is also time consuming and expensive. By first tuning a cable to tension equivalent of the luff load in a typical sailing case, then “bearing off” to a deeper angle and applying the pitch moment midpoint cable we got results within 110 % of Open foam.

The nosedive load case will see around half of the max righting moment combined with a pitch moment roughly twice that of max RM. As the yacht pitches forward the waterline narrows and form stability is lost at the same time as steering. Eventually the yacht will lose steering ending up in a broach on its side. Before doing so the rig will be subjected to longitudinal forces that are counteracted mainly by the capshrouds which has a significantly shorter lever arm than would a backstay or runner.

On a normal rig this would result in excessive forward motion and make the spar snap at the deck. A wide spreader envelope plus Carbo-Link’s CL ELLIPSE rigging featuring high stiffness and high ultimate break loads, combined with a dock tune well in excess of typical numbers keeps the rig in check. 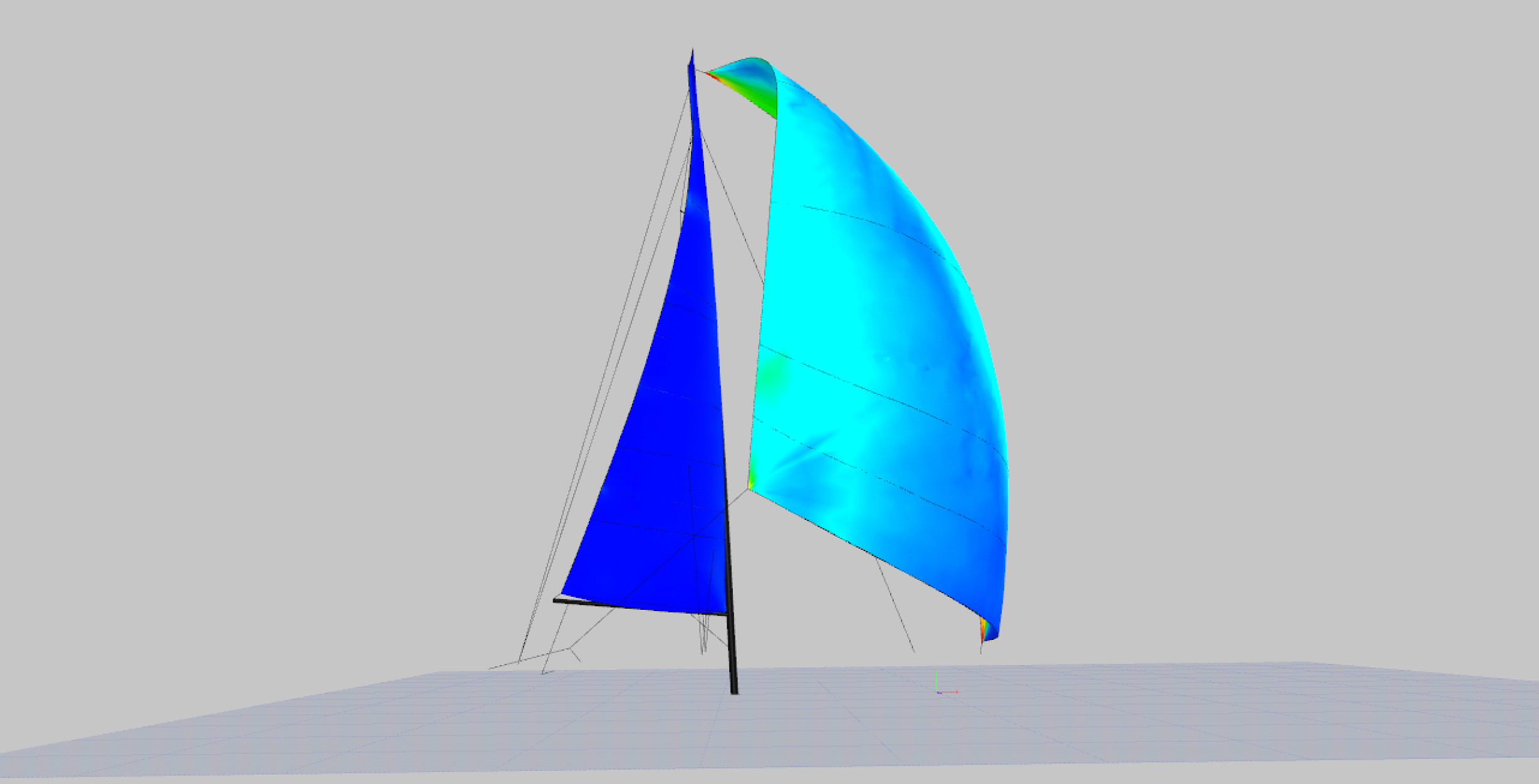 A common notion is that tight shrouds will prevent the rig from moving forward. This is however more a resultant of the true component in stopping the rig motion than the actual means of reducing the inevitable pump of the rig as you stop in a wave. It is natural to think that it is what is holding the rig “from behind” that does the job but since rigging stiffness, and therefore stretch, is not affected by dock tune it is – in a sense – the headstay that does the job.

While a case like this is highly unlikely even approaching gale territory, a “chicken limit” of 20 knots of true wind has been set for the application of a safety runner. The ambition is to relax this limit as the rig is set through its paces being load monitored in real waves.

Onwards we see a potential to evolve the project further through analysis of nosedive scenarios and resulting loads as well as taking advantage of Carbo-Link’s precision in calculations and manufacturing. In industrial applications safety factors as low as 1.2 is accepted which would increase the operating envelope of the rig to also encompass extreme nosedive cases without the mentioned “chicken runners” if combined with a design loop analysing implications for the mast tube and hull. Another factor which would be a game changer is if the monohull community would learn from the work done on IMOCA designs and multihulls such as the Ultime class to make sails which are fast even with significant headstay sag. 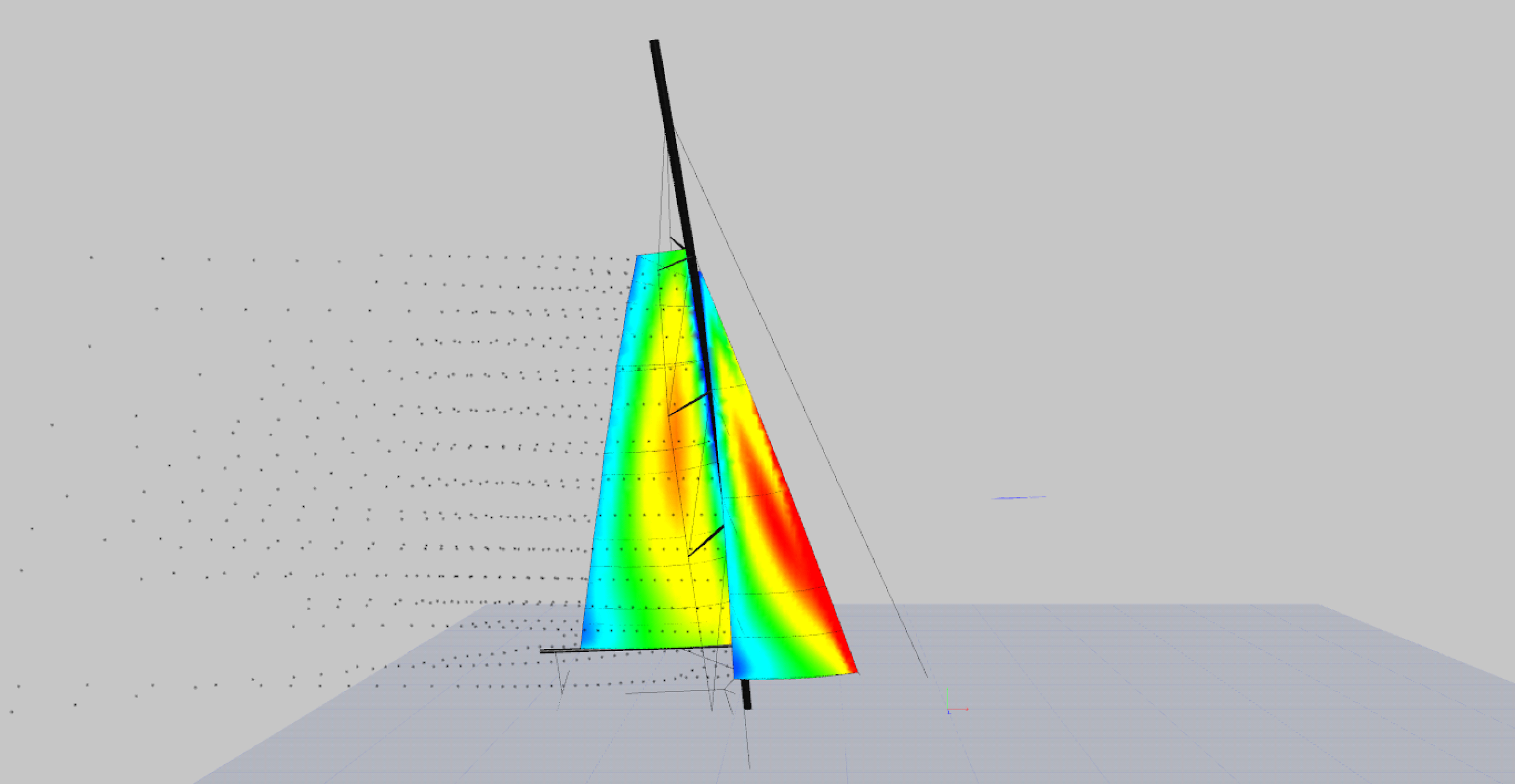